MNCOGI is seeking nominations for the annual John R. Finnegan Freedom of Information Award.  Send in your nomination by March 1 for a worthy individual or group or organization working to promote government information and increase transparency.  (form: WORD, pdf)  For inspiration, here is a list of former FOI award recipients.

This week, Ruben Rosario from the Pioneer Press highlighted the work of a prior award winner in “Meet Rich Neumeister, the People’s Activist.” 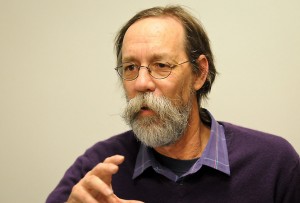 Rich Neumeister received the FOI Award in 2009.  He still fills his watchdog role at the Capitol, working on his own dime to track data practices and privacy legislation.  The lively profile includes a description of how Rich gained the trust of legislators over the years.

Depending on whom you talk to, Neumeister is an annoying pain in the butt or an indefatigable watchdog who has helped legislators massage laws to better protect privacy rights as well as makegovernment more transparent over the years.  Two straight-shooting and veteran lawmakers I respect attest to the latter.

“Rich is an asset at the Capitol,” said Mary Liz Holberg, R-Lakeville, an eighth-term legislator and member of the House Data Practices subcommittee. “He represents the average citizen and is often battling against the interests of organizations with highly paid lobbyists. He is respectful, knowledgeable and provides a vital perspective on keeping government accountable while protecting individuals’ privacy rights.”

Neumeister said he still has to pass the “weird guy” test annually with rookie lawmakers. That included Rep. Michael Paymar during his early years at the Legislature.

“I wasn’t sure if he was a black-helicopter guy or a good- government guy,” recalled Paymar, DFL-St. Paul. “While his points usually seemed legitimate, he didn’t look like the lobbyists I had been used to dealing with.”

Throughout the years, though, “my respect for Rich grew, in part because of the way he handled himself, but also he really knew what the hell he was talking about, and he understands the intent of the law,” added Paymar, who is serving his ninth term in the House and chairs its Public Safety Finance and Policy committee.

“When a data privacy bill comes up, I wait to hear from Rich.”

View all posts by mncogi